Cross-posted on The Nightstand

Yesterday my friend Brittany and I elected to blow off work/deadlines/common sense and go to a waterpark. Everything went great until a friggin’ MONSOON decided to roll in, trapping us like drowned rats in the locker area under a flimsy aluminum tent with dozens of screaming children and their equally panicked parents. We huddled there for a good half hour as the storm passed through, taking tree branches and cabanas with it, while we watched, helpless and shivering, until the rain ended and the employees emerged from their safehouses to calmly inform us battered parkgoers that “The park is closed for the night. Go home.”

Anyway, my point is that on the drive back, we got to talking about this here blog and the post that I was to write for today. I told her that it had to do with why I picked the paranormal genre, and when she asked why did I pick it, my answer was that it was more like the genre picked me. “Well, there’s your blog post right there,” she said. “Now where the hell is the nearest Red Lobster?” 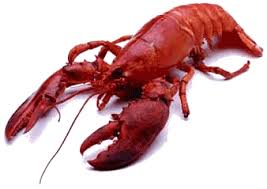 “No, no, go back to the blog thing. Fascinating, that.”

Several Cheddar Bay Biscuits and crab legs later, I decided that she was right. See, my novel CROAK is about a girl named Lex who turns so delinquent that that she gets sent off to live with her uncle in the Adirondacks for the summer, only to find out that he is a Grim (as in reaper), and that he’s going to make her one, too. And he’s not the only one – Croak, the town, is full of other Grims, including a group of teenagers just like her who are training in a sort of internship. Instead of fetching coffee, though, they’re reaping mortal souls.

Now, I don’t know where any of this came from. I was working in a bread store one slow Sunday afternoon and it all just sort of popped into my head. There’s nothing remotely morbid or paranormal or deathly about bread (unless you’re allergic to gluten, I guess?), but there I was, jotting down Afterlife scenarios amidst a pile of sourdough crumbs.

So as I said, the genre chose me. The more I wrote, the more I liked being able to play around with an invented world that is as real as anything to Lex and her friends. One that lies in secret, invisible enough to the rest of us that it can continue to hum on just underneath the surface and keep the world running as it always has.

My mother sometimes has a problem with all this. “I thought we gave you a very happy childhood, sweetie, with a swingset and pink play house with matching kitchen and everything, and this is what you write about? Death and violence?” She’ll then narrow her eyes. “Did something happen to you that you never told me about?” Before she can whip out a doll and instruct me to point at the bad places I shouldn’t have been touched, I quickly reassure her that no, nothing happened, Mommm. I just randomly came up with this little nugget of an idea and the entire world mushroomed out of it, almost beyond my control.

Because, seriously, paranormal is fun. It’s a blast to imagine what’s possible outside the realm of the laws of physics, outside our own experience. We don’t know what happens after death, so why not make something up and run with it? Throw some teenagers into the mix? Make it a bit of a dark comedy, because in my opinion you can’t write a book about death without a healthy dose of humor? The possibilities are so endless that it’s almost a crime not to explore them. I’m still finding new ways to manipulate the world, come up with new devices that will further the plot, and play around with the fundamental laws of our universe. Where else can you get away with all that without either being committed to an insane asylum or getting into a quantum throwdown with Stephen Hawking?

“I’ma rip a black hole in the universe and fling you into it, bitchaz.”

So if I may end with something as lame as a metaphor, think of the paranormal genre for me as being kind of like that typhoon that ended my day at the waterpark – I barely saw it coming, had no idea it would be as powerful as it was, and ended up using it to tell a cool story. And, also like my book, I got a raincheck/sequel to use at a later date! Take that, screaming children!