NOTE: The YAmazing Race is now over. Winners will be announced on the Apocalypsies blog tomorrow, and I will post the winners of my own personal contest here on my own blog tomorrow as well. Thanks to all who raced, and good luck!

It’s that time again! So begins the YAmazing Race with MGnificent Prizes, a massive blog hop featuring over 50 debut authors, and prize packs that include books, gift certificates, swag, and more! If you haven’t yet been to the Apocalypsies website, please click here to start from the beginning and read the complete rules. Now on to the race!

Fed up with her wild behavior, sixteen-year-old Lex’s parents ship her off to upstate New York to live with her Uncle Mort for the summer, hoping that a few months of dirty farm work will whip her back into shape. But Uncle Mort’s true occupation is much dirtier than shoveling manure.

He’s a Grim Reaper. And he’s going to teach Lex the family business.

She quickly assimilates into the peculiar world of Croak, a town populated by reapers who deliver souls from this life to the next. But Lex can’t stop her desire for justice—or is it vengeance?—whenever she encounters a murder victim, craving to stop the attackers before they can strike again. Will she stay true to the rules of the Grimsphere, or ditch Croak and go rogue with her reaper skills?

AND NOW AVAILABLE, THE SEQUEL TO CROAK: SCORCH!

Lex is a full-time teenage grim reaper – but now has the bizarre ability to Damn souls. That makes her pretty scary, even to fellow Grims. But now Lex is a pariah in Croak. To escape the townspeople’s wrath, she and her friends embark on a wild road trip to DeMyse. Though this sparkling desert oasis is full of luxuries and amusements, it feels like a prison to Lex. Her best chance at escape would be to stop all the senseless violence that she caused—but how can she do that from DeMyse, where the Grims seem mysteriously oblivious to the bloodshed?

Get your grubby hands on Croak and Scorch today from Amazon, Barnes and Noble, IndieBound, or your favorite bookstore!

Got all that?
Good, because you’ll need to store it all up in your brain for the quiz ahead. And remember, there are four total quizzes, so for maximum prize winnage opportunities, be sure to fill out all four!

But hold the phone! Another giveaway? WHAT IN THE GOSH DARN HECK?
Enter my contest for a chance to win a copy of Scorch – PLUS a very cool coffin box that I made. With spider webs. It’s pretty cool. 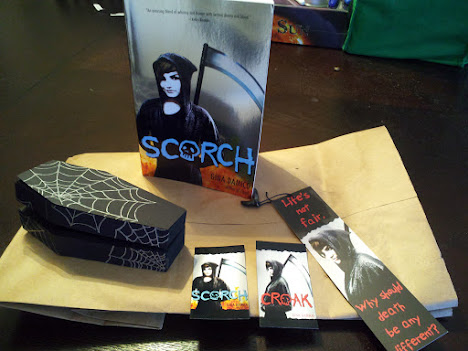 Five lucky runners-up will also receive a Croak prize pack made up of a pendant, bookmark, magnet, and signed bookplate – so enter now! (Giveaway is open internationally.) There is an all-you-can-eat buffet of ways to do so: follow on Twitter, like on Facebook, follow this blog, follow on Pinterest, sign up for my newsletter, or leave a comment below telling me about your worst or best Halloween costume ever. When you’re all done clicking and liking and following, just fill out this little form, and you’ll be entered! (You MUST fill out the form to be entered, otherwise I won’t know what to give you credit for.):

Contest is over – form is closed.

Now what?
Click here for the next stop on the race!